It’s what we practice and share to protect our area’s land and water.

Because it’s never too early to create a love of nature.
Learn more

Measuring the effectiveness of stewardship practices.
Become a citizen scientist 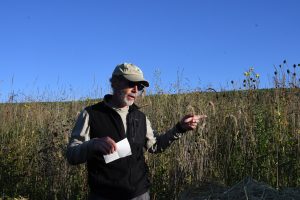 About a dozen people were on hand to tour the prairie strips planted by Valley Stewardship Network (VSN) on the farm of Dave and Betty VanDyke last Wednesday. The two own about 115 acres in the South Fork Bad Axe River Watershed, and have three acres planted in prairie.

Currently, VSN has planted and monitors more than 40 acres of prairie strips planted on 15 farms in the Driftless Region. VSN pays for the seed (about $640 per acre), and provides technical support and planting. The landowner is responsible for preparing the land, and doing the maintenance after planting.

VSN’s Dave Krier explained that they will typically start the process with a landowner a full year, before the prairie strip is planted. This is because weed suppression for a full year is essential to the process of getting a prairie strip to take. If this is not done, then the planting might fail because slower-growing prairie species can be shaded out by the faster-growing weed species.

The tour included one small area planted by VanDyke on his own, one planted by VSN four years ago, and two planted by VSN two years ago. The seed mixes planted are purchased from Shooting Star seeds in Minnesota, and contain a custom mix of grasses, forbs and shrubs.

The first planting viewed by the group was planted by VanDyke without assistance from VSN. It consists of a small triangle of land above a more erodible field that always presented challenges to VanDyke about what to do with it. He said he had purchased a seed mix without grasses from Prairie Moon Seeds for the project. The mix he selected did not contain any grasses, which he said he now regretted.

This is a moist ground mix with about 40 varieties of seed in it,” VanDyke explained. “My maintenance plan for the area this season is to clip it, and then to burn it this fall.”

VSN’s Tom Lukens shared that generally a fall burn will favor forbs species, and a spring burn will favor grass species. He said that burning can be a challenge in prairie plantings without enough grass in the mix.

The second planting viewed was a long half-acre strip at the edge of a field, just above the first planting area viewed. The mix, planted in April two years before, contained eight grasses, 27 forbs, and other species.

The area was full of Black Eyed Susans and other forbs, but VanDyke reported struggling with weeds in the plot, requiring more frequent mowing,

“Some seeds, like forbs, have to go through a weathering process and overwinter before they will germinate, which is one of the reasons a fall seeding can be favorable,” Lukens observed.

Lukens reminded the group that in their first year, native prairie plants generally don’t get above six inches in height. He said that they tend to spend the majority of their first few years putting on below-ground growth.

The third planting was the most mature strip on the farm, having been seeded four years ago. VSN’s Dave Krier described it as “the best prairie strip planting of all that VSN has planted to date.” Like the second planting, this plot had been sowed in the spring.

“Last year, it was the blue stem that dominated, and this year it is Canada Wild Rye and Indian Grass that appear to be dominant,” Krier said.

Krier said that he and John Delaney, an authority on prairie strip plantings, had come to this plot earlier in the season to conduct a pollinator survey.

“We found 13 groups of pollinators and 25 floral associations in this plot, indicating that it is providing the food needed by native pollinators,” Krier said. “When you compare the diversity in this plot to the corn field right next to it, you can quickly see that on farms without prairie plantings, all those fields of corn and beans are like a food desert for pollinators.”

Krier explained that prairie strips really don’t require any soil amendments to grow, and almost seem to do better in poorer soils. He said that his team did, however, test the soil prior to planting, and then every year after that.

“What we have observed in every case is that year after year, when we re-test, we find that soil organic matter and water infiltration increase,” Krier said. “A prairie strip can infiltrate 2.5 inches of water in 30 minutes.”

Krier said that this plot also demonstrated the benefit of planting the prairie strips in less productive acres on a farm, such as those right next to the tree line.

“The area where this strip is planted used to have corn on it before,” VanDyke explained. “I chose to plant a prairie strip here, because year after year, my experience was, the corn in these rows wasn’t even worth harvesting because of predation by animals from the woods.”

VanDyke said that he had not yet seen any species of grassland birds living in the plot, but was “hoping to see Bob O’Links and Meadow Larks.”

The fourth and last prairie strip planting viewed on the VanDyke farm caused tour participants to exclaim in wonder. Like the second planting, it had been planted only two years before – literally on the same day. But in height, vigor, and diversity of species on view, it nearly rivaled the four-year planting.

The plot was planted on a west-facing slope, at the bottom of a field, just above a tree line and a steep decline in the hillside below. The site is shaded from the afternoon sun.

“This plot demonstrates the wisdom of using the mixes that we do, because the diversity of seeds allows us to plant them in areas that receive different amounts of sun and rain, and have different slopes,” Krier explained. “This plot is also located in a less productive area of the farm because of the afternoon shade and predation from animals, and is ideally positioned at the base of the field and above the slope to capture nutrients, and slow down and infiltrate water coming off the field before it becomes runoff.” 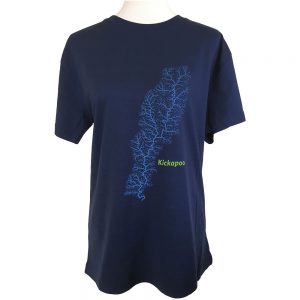 Connect to Protect Your Watershed!

These shirts make ideal gifts!  They were designed by local artists and depict local watersheds.  They are 100% organic cotton!

Visit our online shop to take a look at all five of our Valley Stewardship Network Watershed T-shirts!

We’re encouraging everyone to get to know their own watershed and all the people, plants and animals that are a part of it.

We have T-shirts for the Kickapoo, Bad Axe, Tainter Creek, Coon Creek, and West Fork of the Kickapoo watersheds.

Don’t know which watershed you’re in?  Try finding yourself on this map, or contact us at info@valleystewardshipnetwork.org. 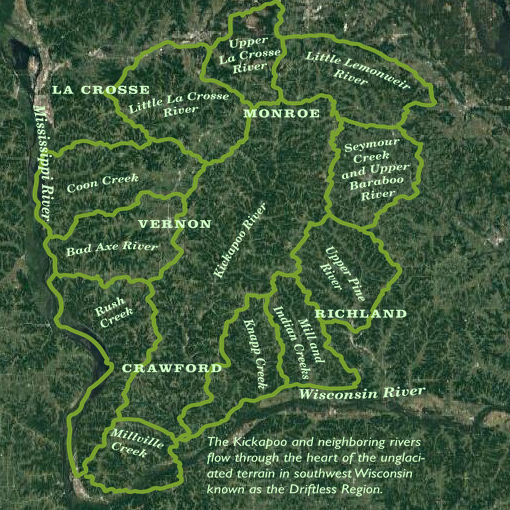 For maps of specific land parcels, contact us about custom GIS mapping services.