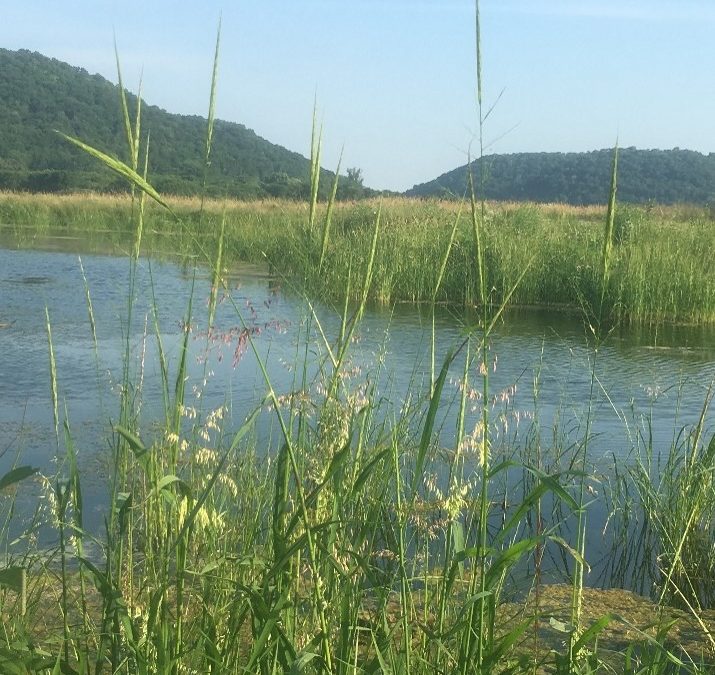 Agriculture and development have severely reduced the acreage of wetlands across the countryside.  Wetlands support an extraordinary diversity of wildlife.  They trap sediments and nutrient-laden agricultural runoff.  Wetlands serve as sponges for flood waters too.

We constructed a 1.5-acre open-water marsh in an effort to restore some wetland habitat and to provide wide-ranging ecological services.  An open-water marsh is not intended to be a pond.  Ponds are steep-sided and provide less shore habitat that supports less diversity.  Shallows are the areas that most plants and many animals prefer.  Emergent aquatic plant species and much of the wildlife exist largely in water 20″ and shallower. Our wetland is proof of the adage “build it and they will come.”  Excavating was done in the fall of 2016, and the area filled up over the following winter, fed by a small spring-fed stream to the south.  Frogs and turtles showed up immediately that first spring.  Since then, we have been visited by several new species of water fowl, shore birds, amphibians, reptiles, and mammals, including sandhill cranes, trumpeter swans on migration, golden and bald eagles, osprey, muskrat, beaver, and mink.  We even had two broods of fuzzy, little wood ducks the past two summers.  There are new resident water snakes, four species of turtles, frogs and toads galore, scores of graceful swallows, and on and on…enough to make grandkids and big old kids like us tickled pink.  The sandy island in the middle of the the marsh is designed, by size and orientation, for Blanding’s turtle nesting.  The Blanding’s turtle, a Species of Special Concern in Wisconsin, is one of the four species of turtles we have now documented, including also snapping, painted, and spiny soft-shell.  Many predators of turtles and ground nesters do not care to swim, so we are hoping the island will keep the racoons, skunks, and feral cats away.  We haven’t yet seen signs of island nesting.  This new wetland already provides habitat for countless critters, including thousands of minnows and at least three species of larger fish that were washed in by the floods.  Fish are predators of amphibians and reptiles, so we weren’t thrilled, but we couldn’t pretend to be surprised.  After all, water fowl are known to bring in fish.

Over the few years of the wetland’s existence, we’ve experienced three major flood events that flowed through the marsh.  We had a little damage to the back berm, but, encouragingly, less with the second flood and none with the third.  Repairs required one 16-yard load of clay plus a couple of loads of topsoil with some tractor and shovel work.  The real damage was twofold:  the introduction of milfoil and over 4″ of deposits of fine-silt sediments carrying excessive nutrients.  We sent in a sample of the muck for nutrient analysis, and, as suspected, found it to be off-the-charts high in phosphorus.  This is what is called “legacy” phosphorus, washed from streambanks composed of erosive deposits from years of poorly farmed upland fields.  Fortunately, we have had no excessive blue-green algae blooms though.

Several emergent aquatic plant species hav been planted along the shallows, adn a sedge meadow mix with 22 forbs and 10 sedges and grasses has been planted around the shores.  The swamp milkweed has a delightful fragrance, and the butterflires and bees absolutey love it.  The occasional bright scarlet cardinal flower is a treat in late summer.