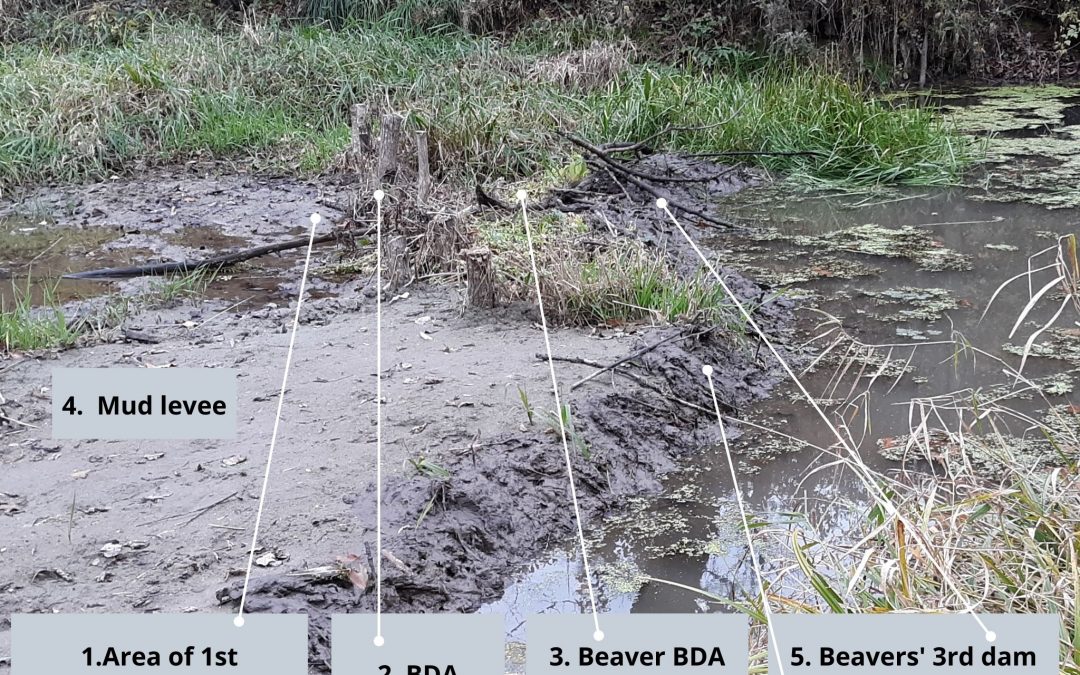 My decision to purchase my property back in 2003 was strongly influenced by its location on the West Fork of the Kickapoo River, the presence of beavers, and the diversity they support. When I first made my way through dense brush to the edge of the beaver pond, now below the Little Barn Cabin, I put up several wood ducks, a green heron, and a great blue heron. I saw a couple of painted turtles swimming about and a pileated woodpecker on an overhanging black willow. I heard frogs. Though I had been looking for property less than a full day, I was done looking right then and there.

There were millions of beavers in North America before white folks showed up and started killing them to feed fashion and the fur trade. Beavers are, in fact, credited with why North America has so much fertile agricultural land heavily concentrated in river valleys. Beavers helped create most of our original temperate wetlands. These wetlands are known to be among the most diverse and biologically productive natural communities in the entire temperate world. Wetlands created by beaver activity also provide multiple ecosystem services including groundwater recharge, sediment and nutrient trapping, and wildlife habitat for innumerable plant and animal species.

The beavers and I have subsequently been doing a tit-for-tat dance here on my land for the past several years. My first encounter with their ways was a disappointment. Having met and been impressed by an old German fellow out of Red Wing who grew and trained walking sticks and canes, my first summer here I bent and staked numerous willow saplings up-slope from the pond in an effort to grow my own. I bent curves for handles and carefully tied the rest to grow straight up. The following year I found the beavers had taken nearly all of them out. I didn’t know it, but they love to eat willow. If they could not get the whole sapling, they removed the sections between the ties. It was a total loss.

When cut, willows make several new sprouts. They became dog-hair thick, and I grew concerned that they might overwhelm and dry out the little pond, destroying the over-wintering habitat my beloved turtles and frogs require. I researched and started a campaign to cut and stump treat with herbicides. Do this in the fall, I was told, as this is when the plants’ reserves are being translocated to the roots prior to leaf drop. But, cutting 6” off the ground was tedious, and often the stumps were hard to find when I came back with the herbicide sponge. Over the next few years, I did some this way, and others I cut at waist height and then treated. Those cut short died, but those cut high made a witch’s broom of new sprouts. There came to be hundreds of these willow saplings that, it seemed to me, were threatening to suck the water out of my little habitat jewel.

I stood at the pond’s outflow one fall four years ago and thought despairingly about the task of cutting and treating that lay ahead. I sighed and said out loud “I wish the beavers would come back and eat these darn things back down to stumps.” Two weeks later, as if they’d heard me, the beavers had moved back in and had begun to plug the old outflow with a mud and stick dam (see photo below). They were cutting the willow saplings both for the dam and for their winter food cache. I was elated. Water levels increased. The willows were being harvested with no effort on my part. 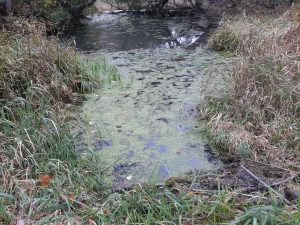 The very next summer though, they moved on and the dam they built started to fail (#1 in cover photo). The water level of the pond was falling. After doing a little research, I came upon Ben Goldfarb’s “Eager: The Surprising Secret Life of Beavers and Why They Matter.” In that book, he mentions what are called “beaver dam analogues” or BDAs – manmade beaver dams built of logs, sticks, mud, and a few posts driven into the ground. So, I cut some willows to make the logs, sticks, and posts and literally mucked around putting them in very near the beaver dam they had abandoned (see photo below – also #2 in cover photo). Not only did it work to raise the water level again, but, the beavers, as the book said they might, came back to improve on it and basically show me how it should be done (#3 in cover photo). They built a whole new and better dam in front of my beaver dam analog. Perfect! 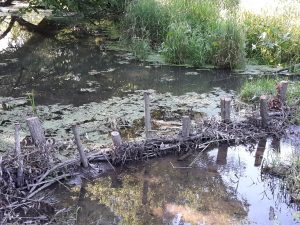 However last year, in spite of their new and improved dam built in front of mine, the pond started losing water at an alarming rate. After the water level went down past a certain point, I was able to see where the water was leaving the pond. It was flowing rapidly underground out of the side of the channel cut by countless animals coming and going and the one that leads to the mud slide to the river. We have seen snapping turtles, otters, muskrats and other critters coming and going in this track. (From a kayak on the river, I once saw a snapper go end over end down this steep slide. It landed upside down, and I was shocked to see how fast it turned itself over and quickly disappeared into the river.) Having discovered where the water was draining out, I needed to fix it.

My efforts to compact the soil in the area and shovel in a little extra dirt to plug it up ultimately didn’t work. So, I had a load of dirt delivered downstream and ferried over a few cubic yards of soil scoop by scoop with my small tractor and front-end loader, creating a mud levee (#4 in cover photo). This was late in the fall of 2021. It worked. The leak was plugged. The pond’s water level increased. Then, just as before, and within three weeks, the beavers came back to show me how it should really be done. They scraped mud from the bottom and added inches to the height of my constructed earthen dyke. They even extended the dam further to the south (#5 in cover photo).

It is funny to have one’s best efforts improved upon by a rodent … even if it is North America’s largest rodent. I have come to think of beavers as smart, little, determined critters and one of the original rotational grazers. They cut one sapling, and two or three years later there are three or more times as many saplings to cut for food. As long as they keep coming back, as they have been, this is fine.

I am glad to see that the beavers have since re-cropped most all the willow saplings between the spring and the pond; have removed most of the brushy wild hazels and prickly ash between the Little Barn Cabin and the pond, thereby improving the view; and have even harvested several of the box elders between the pond and the river. They would have taken any oak in this general area too, but I’ve installed “beaver wires” around all of them.

They did get ahead of me just downstream. I was shocked to find they had already chewed part way through some 12-18” diameter maples and even larger oaks on the wooded slope above the river immediately downstream of the beaver pond. I immediately put beaver wires around these too.

So, the tit for tat with the beavers continues on more than one front. I don’t mind the challenges. The amount of life that little pond supports is plenty of reward … frogs, snakes, turtles, birds, mink, otter, and more … big and little kid and critter heaven.