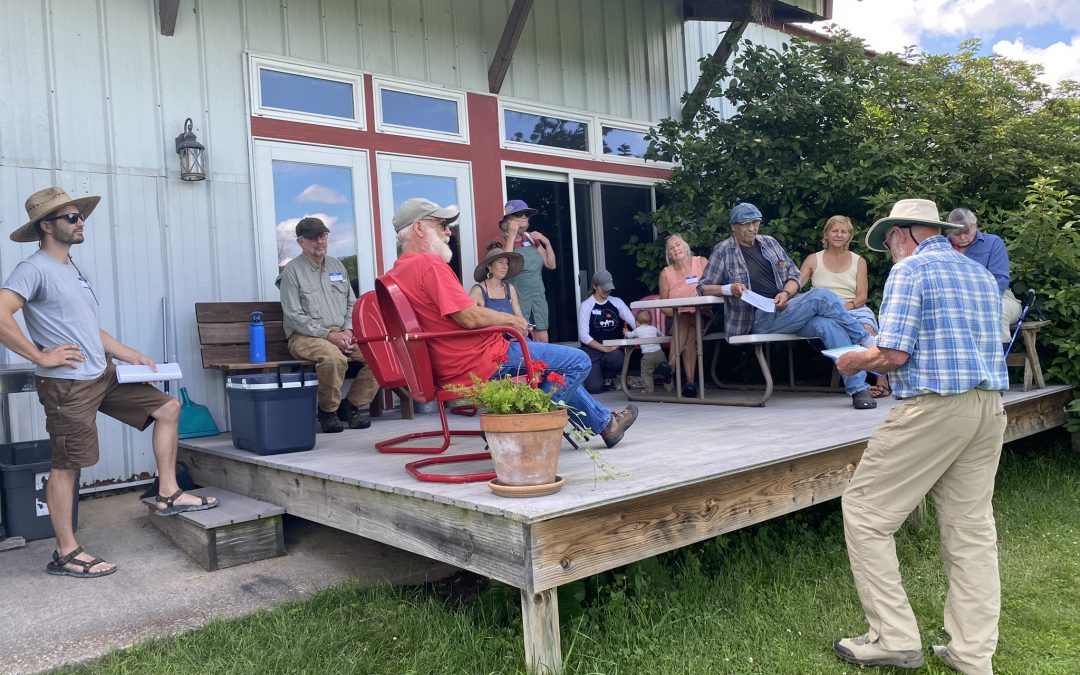 Tom Lukens, Valley Stewardship Network Board Chair Emeritus, recently shared the conservation projects he’s been working on at his Nature Nooks Resort (NNR) property with a group of interested landowners.  The NNR mission is “to protect and enhance biodiversity and carrying capacity and create a means of sharing.” Over the past few years, and during 2021 in particular, Tom has planted 250+ native trees and shrubs spread out over a dozen genera.  In addition, he and his wife Pam have created wetlands, planted prairie, restored streambanks, and welcomed a wide variety of wildlife to their property!

Some of these native plantings were used to create a private “outdoor room” around a fire circle.  Next up was a prairie strip planted in 2008.  It contains upwards of 50 species.  The summer sunlight highlighted the beautiful flowers sparkling through the strip.  Not all of Tom’s prairie strips have been as successful.  Plantings along the river got buried in sediment left behind by recent flood waters.  Prairies take time to develop, and patience is required, as indicated by the saying: “First year it sleeps, second year it creeps, third year it leaps!” 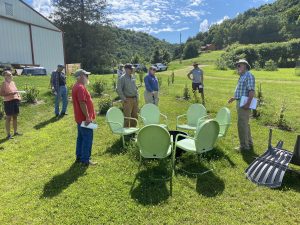 In one of his prairie strips, Tom planted 25 oaks.  Oaks harbor more species of invertebrates (insects and spiders) than other tree species.  He makes sure to start them in nylon mesh tubes.  As they grow, he protects them with 5-foot welded wire fence rings.  He performs the “oak cage shuffle.”  As trees grow large enough to survive on their own, he shuffles the cages around to protect smaller trees.  He joked that the cages cost more than the trees!

Next. the group got a closeup look at a human/beaver dam.  Beavers started the dam and Tom added to it.  The beavers came back and enlarged the dam.  As it got older, Tom once again added on to it.  The dam has provided a pond that is home to frogs, turtles, toads, snakes, mink, and otter.  We saw a slide used by the otters to slide into the pond. 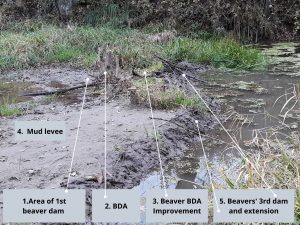 Next up was streambank restoration.  Human agricultural activity over the last century caused the washing of soil from surrounding ridges and hillsides into the river valleys.  These erosion-caused deposits are 4 to 8 feed deep along that stretch of the West Fork of the Kickapoo.  Most of the stream flow throughout the Driftless Region cuts deeply into these human-caused soil deposits, leaving tall and continuously slumping dirt banks that won’t support vegetation.  High water events move these often nutrient-rich bank soils into streams, leading to degradation of fish and other aquatic habitats.  When these soils contain phosphorus and nitrogen and end up in our surface waters, the result is low oxygen levels and algae blooms that can actually kill fish and other animals.  Tom engaged in bank shaping and bank armoring to reduce erosion.  This work stabilizes the banks by shaping them to more gradual slopes and planting them with perennial vegetation.  Logs and large rocks are installed to provide fish habitat.  A sandbar appeared that is now a basking area for spiny soft-shelled turtles. 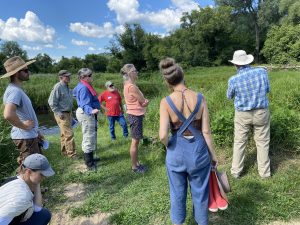 The final tour stop was a wetland area – an open water marsh.  Emergent aquatic plant species and much of the wildlife exist largely in water 20 inches and shallower.  Several emergent aquatic plant species have been planted along the shallows, and a sedge-meadow mix with 22 forbs and 10 sedges and grasses has been planted around the shores.  The swamp milkweed has a delightful fragrance, and the butterflies and bees absolutely love it.  The occasional bright scarlet cardinal flower is a treat in late summer.  Tom has also planted wild rice that he can harvest. 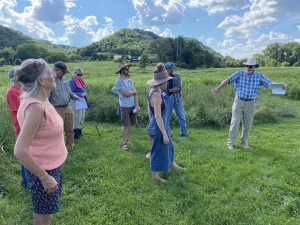 All-in-all, it was a beautiful day for taking a stroll and experiencing the result of Tom’s and Pam’s work on their land. Tom’s projects often require a fair amount of maintenance early on, but the habitat improvements attract new species, adding to the biodiversity and carrying capacity of his property.  Even if you just have a small yard at home, there are many of these practices you can employ to enhance your natural surroundings!  Thank you to everyone who joined us!

Note:  Many of these projects have been shared previously on this blog. Check out previous posts for additional details!