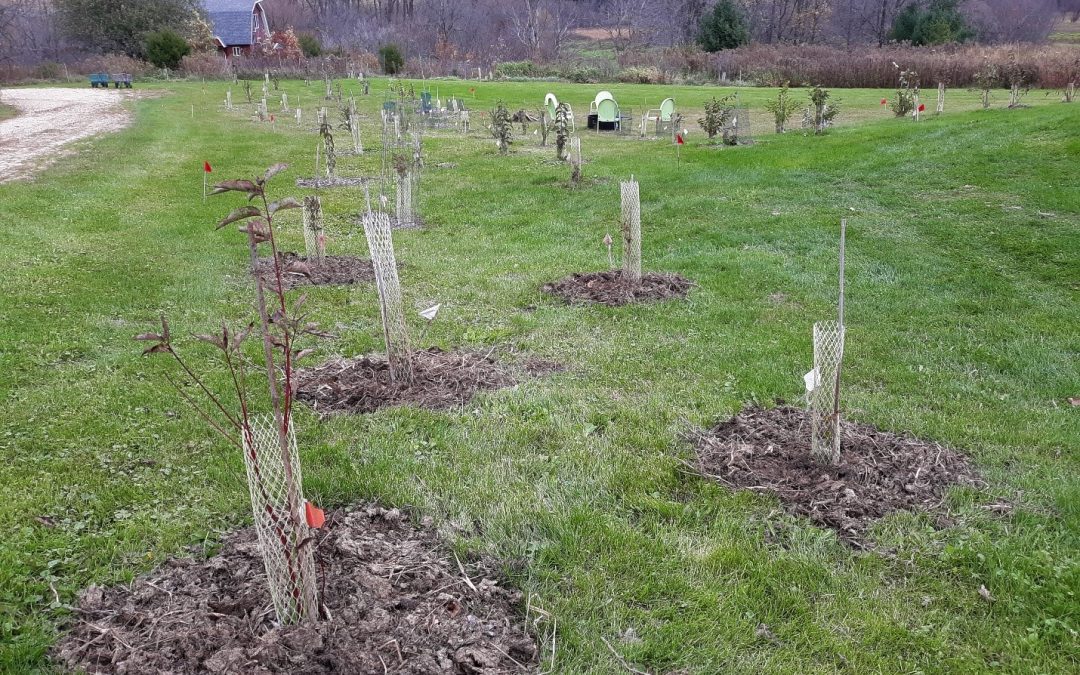 The photo above shows the rural planting of 10 different native species at Nature Nooks Retreat from the same perspective as the photo in last spring’s blog # 9. The difference is one entire growing season. The second photo (below) shows the same site from the opposite end of the planting. In this opposite-end photo, you see tall and vigorous Nannyberry and Chokecherry plants in the foreground. I relate a humorous story about these below. 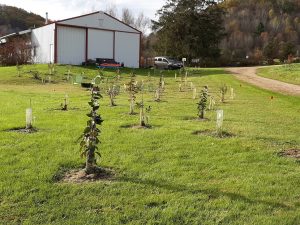 As you may recall, late last spring and early summer were exceptionally dry around here. With plantings of either bare root or very small pots, this meant regular watering. The instructions that came with the plants said:  “If you do not get one inch of rain per week, then you must water each plant thoroughly with two to three gallons of water once per week.” Thorough, deep watering is much better than more frequent lighter watering, as this helps develop deep roots. Consequently, there was a lot of hose-dragging that required up to an hour and a half every week for the first 6 to 8 weeks.

[As an aside, I noticed that the near-drought conditions of early last summer suppressed the growth of nearly all the conifers I had previously planted. Normally, to keep my two evergreens in the yard dense and looking like Christmas trees – so I can string lights on them, I have had to prune the tips of the long new-growth “candles” mid-summer to encourage dense branching and keep them from looking spindly. This year, though, the trees’ natural response to dry conditions was to reduce new terminal growth and instead place their energy into building lateral buds. So, dense growth resulted, and no pruning was necessary.]

As those of you with interest in native plantings to support biodiversity know, the species we planted were selected for how much diversity they support. This is measured in the number of lepidoptera species, moths and butterflies, that feed on them and whose caterpillars nesting song birds feed their young. I knew this, too. Yet, I had a knee-jerk, something-is-wrong-and-I better-do-something reaction in late June when I was checking the Chokecherry and Nannyberry mentioned above. I noticed that all the leaves had been eaten off the Chokecherry! What were once lush and green with many leaves had become bare sticks! The same was true for the Nannyberry, but a little less so. My initial thought was that I had to do something about this. WRONG.

Then it struck me, THIS was exactly why these species were planted – to feed the insects that are at the bottom of the food web. Chokecherries support 377 species of lepidoptera and Nannyberries nearly 100. My young plants were leafless, but they are adapted to this and grew new leaves within a couple of weeks. Now, one would never know they had been denuded early on.

Among the species I planted, it has been the Red Osier Dogwood, Nine Bark, Chokecherry, Nannyberry, Snowberry, Aronia, and American Cranberry that have put on the most growth. It was to be expected that the low-growing shrubs, New Jersey Tea and Northern Bush Honeysuckle, would be slower. These two are also favorites of the rabbits and so have required extra wire protection. At the planting at my son’s house in town, the rabbits have jumped or pushed through the 18” tall plastic fencing. I’d recommend 2’ tall chicken wire protection for these instead.