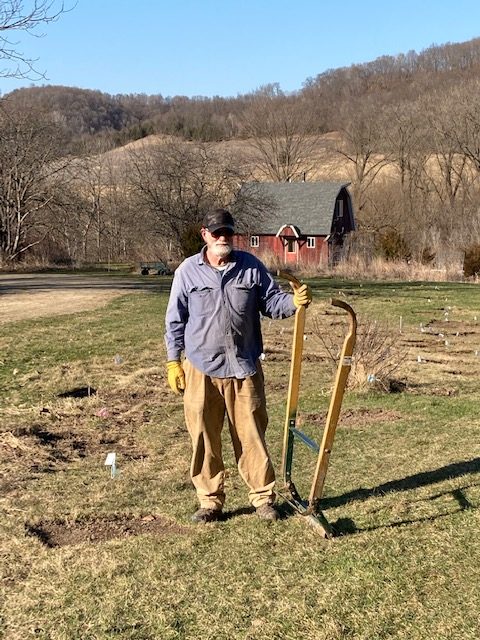 The first step before actually placing landscape flags in the planned plant locations for my rural planting was to count out the exact number of flags for each of the 10 species of plants and to label and color code these. For example, I planned 9 Northern Bush Honeysuckle and 7 New Jersey Tea to be planted closest to the fire circle because these are the shortest of my selections. These got NBH or NJT codes and were color-coded with several strands of yarn in order to be able to see them from a distance.  Hopefully, they will truly end up arranged in casual clusters, as I had intended, and will indeed work together to create visual and textural interest.

After placing the flags, I was able to walk around the area and alter the placement of those that created straight lines, so as to make it look more natural. Subsequent site visits have also allowed for double checking placement, based on a review of recommended plant spacing, as well as assisting with imagining pathways and visual corridors. Allowing time to revisit the site and fuss with fine-tuning before actually digging the holes is in keeping with the carpenter’s adage of “measure twice and cut once.”

With everything staked out, it was time to get the utilities marked in order to avoid damage. This is not as easy as it might sound. Power and communications lines are marked free of charge by the appropriate companies but only to the service box. A call to Diggers Hotline gets this part done. If, however, as in my case, there are private electric lines that run from the box to other buildings, then a private service provider is required. It took a few calls to actually find someone with the equipment to mark these. And, as it turned out, I had indeed placed several stakes immediately above the electric service lines, so these had to be relocated, and, by ripple effect, so did others close by to maintain proper spacing.

Looking now at 87 stakes placed into a sod-covered lawn made me square up on another challenge I’d been trying to ignore. How the heck was I going to be able to give these clumping, multi-stemmed shrubs enough competition-free space to thrive? How was I going to be able to avoid constant weeding at the base of the plants? I had already purchased 3’ by 3’ weed cloth squares and planned to mulch heavily over top of these. However, weed cloth works against the basal sprouting and spreading habits of the selections and gets raggedy and ugly when hit with a weed whacker or mower. They’ve worked well for the many oak, cherry, and pine trees I have planted but will likely suppress the spread of multi-stemmed thicket-forming shrubs. I did not want to resort to herbicides either.

The answer: a few extra hours of real work behind a manual sod-cutting tool rented from Nelson’s for less than 20 bucks a day. With substantial help from my partner Pam’s son Luke, we cut and rolled up the sod on 3’ by 3’ areas around each of the 87 planned plants. This produced a lot of unwanted sod that I was, fortunately, able to turn upside-down and use as water-trapping mulch on the downhill side of numerous oaks and a few red cedars I had planted three years earlier. The now bare soil 3’ squares will get holes augured into their middles and will eventually be mulched with compost or wood chips to keep the weeds down.

The two pictures here show a worn-out me posing with the sod-cutting tool as well as the completed pre-planting staging with positions staked, sod removed, and compost laid out to place on top of the 20 some holes where digging revealed a heavy clay component. Where red clay soil came up when auguring the holes, I have incorporated and top-dressed gypsum to improve water infiltration and plan also to mulch these with composted manure. Where the soil is better, I plan to mulch heavily with plain wood chips, which can be ordered from C&C Landscaping by the bobtail truckload. 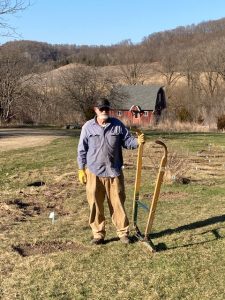 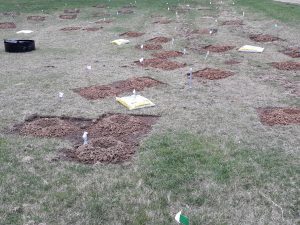 As soon as the plants arrive, I am now ready to plant. Most of the plants will be bare root and must be kept moist and cool prior to planting. I have learned the hard way that any root-drying prior to planting will kill them. If I can’t plant them immediately, they will go into the root cellar wrapped in wet newspaper. However, because I ordered from 5 different sources, I expect deliveries will be spread out – thereby keeping storage times to a minimum.

My next entry, whenever the plants come, will be about planting and mulching and what I plan to do to keep the rabbits and deer away.