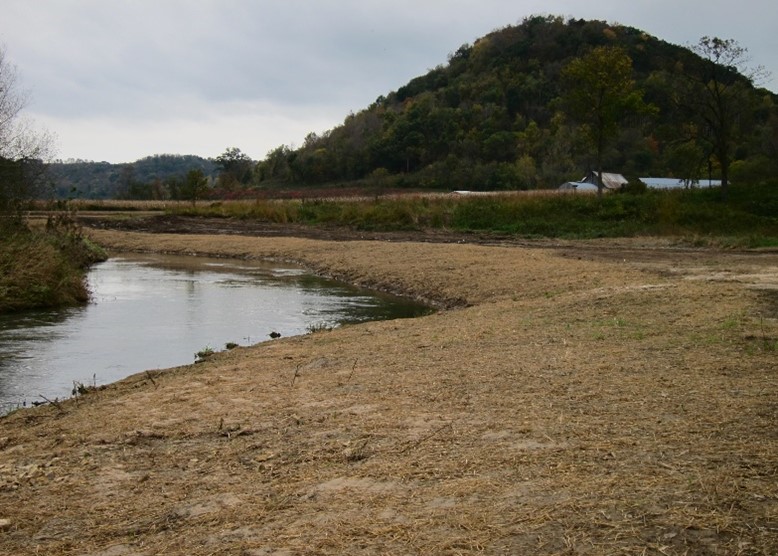 Tom acquired this 87-acre property with its mile of the West Fork in 2003. Since then, a half mile of streambank stabilization work has been done, along with in-stream and other habitat work. This work has been done in stages. The most recent work along 780 feet of the west bank in front of Tom’s & Pam’s house was done in September of 2016.  In June of 2019, 800 feet across the river on the same stretch was shaped.

Human agricultural activity over the last century caused the washing of soil from the surrounding ridges and hillsides into the river valleys. These erosion-caused deposits are 4 to 8 feet deep along our stretch of the West Fork of the Kickapoo.

Most of the stream flow throughout the Driftless Region cuts deeply into these human-caused soil deposits, leaving tall and continuously-slumping dirt banks that won’t support vegetation. High-water events move these often nutrient-rich bank soils into streams, leading to degradation of fish and other aquatic habitats. When these soils contain phosphorus and nitrogen and end up in our surface waters, the result is low oxygen levels and algae blooms that can actually kill fish and other animals. Eroded soil rich in agricultural nutrients transported down the tributaries to the Mississippi River is the reason we have the hypoxic or “dead zone” in the Gulf of Mexico. Though we have no natural lakes in our area, this is why surface water lakes in other areas turn an eerie blue-green and become unsafe for human and other animal contact. Because bank-shaping and bank-armoring reduce erosion and sediment deposition downstream, projects of this sort can quality for Farm Bill-related conservation cost share. One of these two streambank restoration projects was eligible to receive cost share through the Natural Resource Conservation Service’s (NRCS’s) Environmental Quality Incentive Program known as EQIP. The east bank project, however, was not deemed to be a serious enough “conservation need” to merit cost share, so these costs were all on us. 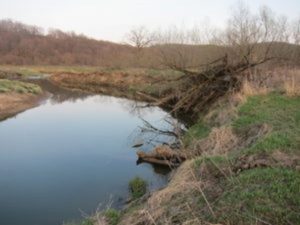 Before: Literally tons of sediment were washing into the river before the shaping activity. Looking downstream, this 250-foot bend was calculated to contribute 35 tons of sediment to the stream system annually!

After: This is the same bend where the deflector logs stick out of the bank.

Streambank work seeks to stabilize banks by shaping them to more gradual slopes and planting them with perennial vegetation. The erosion-prone banks are often protected with rock to “armor” them against high-water events. This was the case on the west bank. Sometimes, though, shaping alone is done, and this was the case on the east bank. Logs, large in-stream boulders, and fish habitat structures called “lunkers” are often installed in the stream during such projects to provide places for trout to feed. Replanting the banks is required. Vegetation established well on the west bank, but within two weeks of work completion and reseeding with an expensive sedge-heavy native seed mix on the east bank, we had a high-water event that washed much of the recently-shaped banks and seed away. We have re-sown this area now, but have not reshaped the banks, as you can see. Some areas have held up and some have not.

Shaping banks and planting them with perennial vegetation allows high water to escape the high-velocity main channel and slow down. They call this “connecting the water course to its flood plain.” This slower water releases some of its sediment load, and reduced water velocity lessens the stress on downstream banks. These are modest efforts at restoring stream physical structure to something like its natural state. Because we have so much former ridge-top soil in our valleys, however, it is nearly impossible to get things back to the way they were in pre-settlement times.

Since the west bank work was completed in the fall of 2016, we have had annual “extraordinary” flood events. When the Jersey Valley dam failed due to torrential rainfall (15” in 24 hours) in August of 2018, many miles of streambanks and much previous restoration work downstream from the dam were washed away. This event also brought 2 to 6″ of new sediment deposition along much of our riverbanks. Our friends further upstream on the West Fork and closer to the dam had three ft of deposition!  We are pleased that the streambank restoration work on our west (near side) bank held up well. However, the shaped-only east bank, completed June 2019, did not fare nearly as well, partly due to a high-water event right after seeding.

As you kayak or walk along Nature Nooks’ piece of the West Fork, there are several stretches where you can see stream restoration work that has been done in five different projects over the last several years. We have now restored roughly half a mile of stream on the property. The most recent work are these two sections in front of our house, mentioned above. Much of west bank in this section used to be 4-, 6-, and even 8-foot high slumping mud banks. We calculated the rate of recession (bank depth in inches) of soil lost per year (bank length X bank height) to estimate that just this 250 foot big bend in the river, with its former 6- to 8-foot-high banks, was contributing 35 tons of sediment to the stream system per year. This is the bend pictured in the photos above.

Some erosion and slumping has occurred on the shaped-only east bank. Fortunately, the inside bank just opposite the big bend has developed into a sand bar, just as we had hoped. This gradually-sloped sand bar now provides basking area for spiny soft-shelled turtles during late spring and early summer. Soft shell turtles are ancient creatures known, through fossil records, not to have changed much anatomically over the last 100 million years!  (Although, they used to be 6’ across.) It feels good to have created some habitat that welcomes these ancient, shy critters whose unchanging form is evidence of a uniquely successful survival strategy. 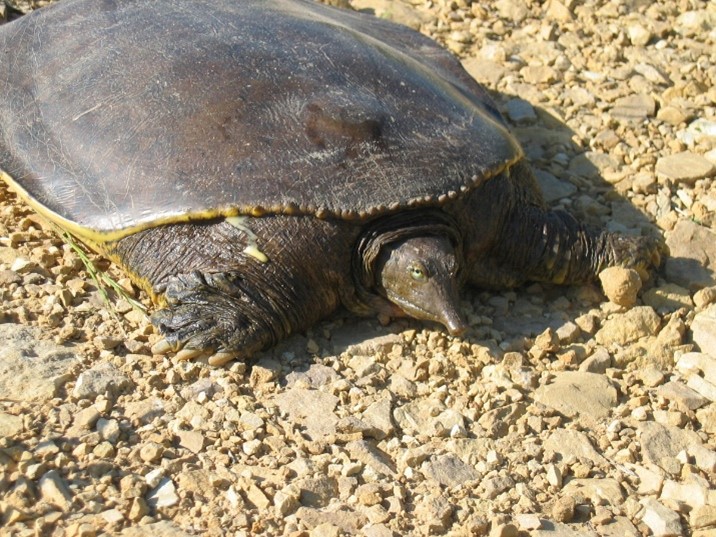 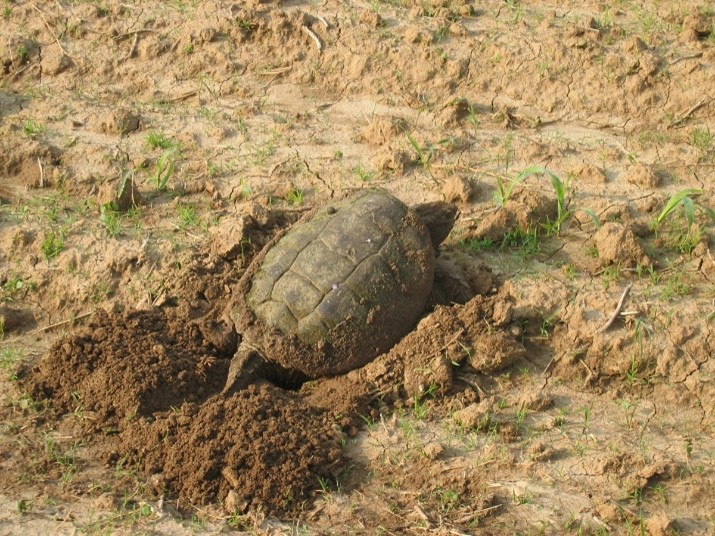 Snapping turtle, caught in the act of nesting

As an added benefit, with the water flowing forcefully into the west bank’s outside bend and hitting the five placed logs you can see coming out of the bank, the turbulence and force have scoured the bottom. Now there is a gravel bottom, and the water is 6 ft deep in places and so has become the new adult swimming hole. One can swim against the current for a natural “continuous pool” effect. There is a mowed entrance to this adult swimming hole just upstream of the bend.

The restoration work plan is usually designed and approved by staff from the NRCS, and sometimes through cooperation with County Land and Water. In-stream work requires certified engineering. There may be conservation cost-sharing money available through one of several different programs. If a situation represents enough conservation need, one can get approximately 70% of costs covered. Heavy equipment is brought in to move soil, shape the bank, add rock, and replace the soil. The bank must, immediately upon completion of the work, be sown with perennial grasses acceptable to NRCS. When cost-share specs are not an issue, we have planted native short grasses and sedges rather than the non-native cool season grasses the NRCS requires. These natives require mowing in the first year or two and occasional fire in subsequent years. However, as mentioned above, floods have deposited so much new sediment that the expensive native seed that requires light to germinate is readily smothered. We have, therefore, already re-sown both banks a second time.